Out of the Lab and into the Bush: Hunting for New Discoveries with Dr Robert Raven.

When the scientists at Queensland Museum received the offer of a Bush Blitz survey at Quinkan (near Laura) in Cape York, Far North Queensland, the enthusiasm was initially dampened by the fact that we had done a similar survey in 2015, just 60 kilometres north, albeit in the dry season. The vegetation in this part of the Cape looks quite homogenous. Would we find that much new? Our excitement was reignited by the prospect of helicopter access to areas normally inaccessible in the wet season, which is when the species diversity really crackles.

Regardless, Bush Blitzes are always great opportunities to work with colleagues, both botanical and geological, not just from our museum but also those from other government bodies including interstate universities and museums. Jointly funded by the Australian Government, BHP Billiton Sustainable Communities and the Earthwatch Institute, great care is to taken to ensure the safety and comfort of the scientists and pander to their preferred survey sites, however inaccessible they may seem. Occasionally, we are also treated to exposure to diverse teachers and their students via Skype or BHP Billiton volunteers. We also greatly appreciate the welcome, teaching and company of the Indigenous people and rangers on the land. 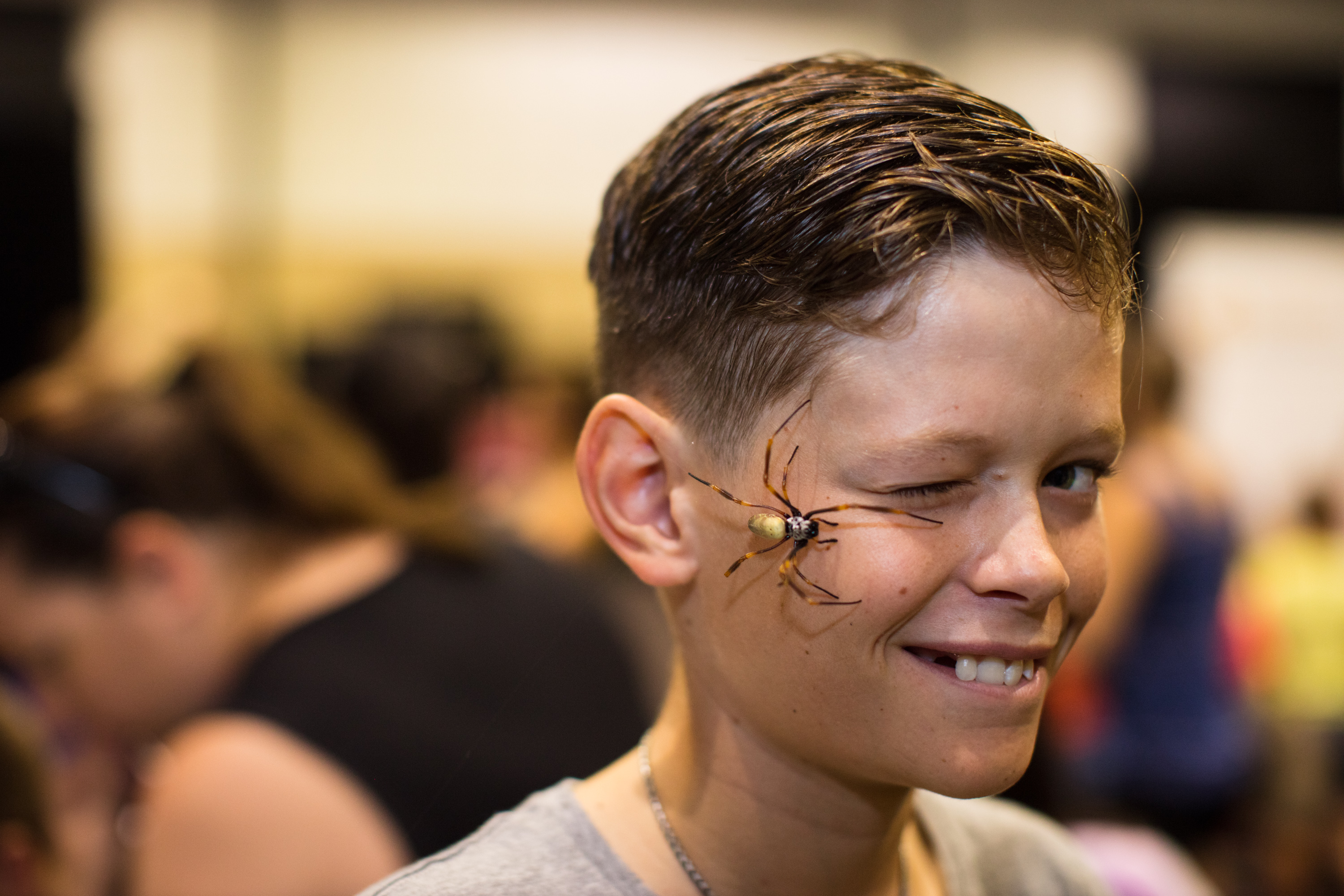 Out of the lab and into the streets. Engaging with citizen scientists at World Science Festival Brisbane 2017

From an arachnological point of view, Quinkan was a “perfect storm” with four arachnologists, led by Dr Barbara Baehr, who alone has described over 600 new spider species. Spider ground traps set at remote locations were checked during and after some of the heavy rain events and most were working superbly. Other arachnologists included Mr Robert Whyte, co-author of a new book, A field guide to Spiders of Australia, Mr Jim McLean from Macquarie University, and me. Forays during the day were initially confronted with stifling, energy robbing heat, and wearing glasses only exacerbated poor vision as the sweat poured down. Night collecting had to compete with the great meals being served but rewards continued to roll in, despite being hammered by thousands of insects attracted to our lights.

I was keen to see which water spider species were here but, alas, there was only one and it was a widespread named species, Dolomedes facetus. However, standing chest deep in a stream looking along the one to two metre high creek wall, I was impressed to see many tarantulas hungrily leering out of their burrows.

Most were small but a couple were quite large and looked like the widespread Eastern Tarantula, Phlogius crassipes. After rustling through my Mary Poppins bag of tricks, I took out some wooden skewers and attempted to bring the spiders out further to catch them. Most quickly retreated; but one showed promise and I was poised ready to entomb the spider in my cupped hand as it ran up the bank. To my surprise, the big one barrelled straight out at me and hit the water, on which I assumed it would float ungainfully. Alas, no, it made an Olympic quality dive into the murky water and disappeared under the bank overhang. No amount of brushing under there would dislodge it.

Several more night attempts were even less successful. During the day, I had a butterfly net on hand into which it would land and, sure enough, out she came. Back in the lab, we tested her water skills and found she was happy to stay under for at least four hours. Research has already begun in order to understand whether she is new or has just got a learned behaviour.

Wherever we looked, even around the campsite, we got a great diversity of spiders including a giant Golden Trapdoor, big and Brush-footed trapdoors, and Saddle-legged trapdoors. Ant spiders and spiders that mimic ants abounded as did the Goblin spiders and Lynx spiders. Once back, Barbara Baehr started working on the catch. It was clear it would be a bumper crop as the number of new species was growing by the day; her count got up to 50. Barbara’s count was based upon families, on which she is a published expert. Robert Whyte’s expertise in jumping spiders added another 30 new species, including a new Peacock spider. My turn next!

The region proved remarkably diverse with deep gorges harbouring rainforest and ancient arachnid orders that were otherwise known only from the iconic rainforest of Iron Range and Bamaga, near the tip of the Cape. We expect that the spider count will be the highest ever, as will the new species count! 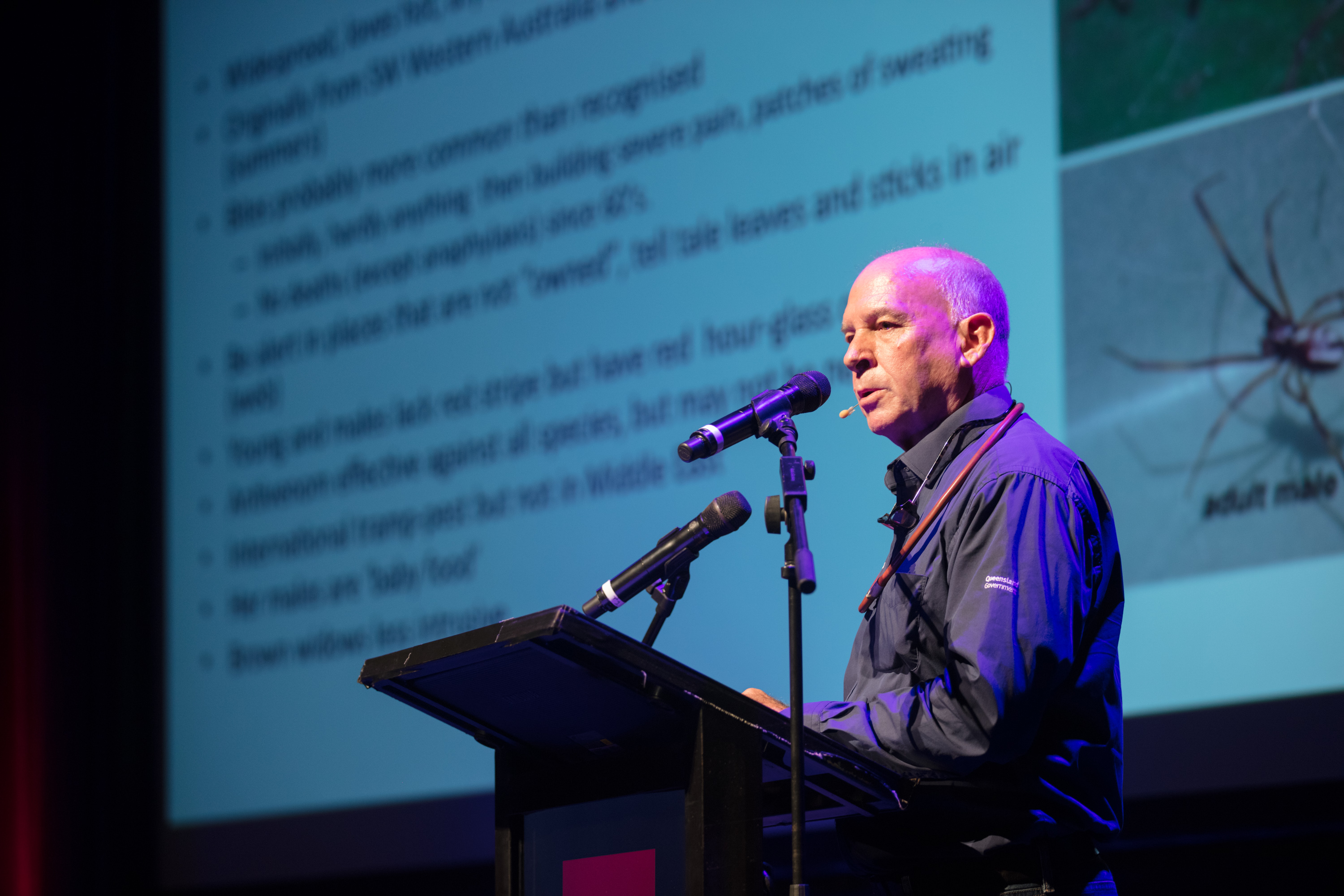