Paulina
26 March 2021
THE NUCLEUS, RIVER PLAZA (OUTSIDE QUEENSLAND ART GALLERY ON THE RIVER SIDE)

German born, 16 year old Paulina Schuemann, moved to Ipswich at the age of two, and considers herself more Australian than German. She stunned her parents and friends by imitating her favourite songs at an early age of 5 and has been singing and playing the guitar ever since.

The foundations to Paulina’s artistry are found in her parents CD collection: old-school artists such as The Beatles, Tracy Chapman and Crowded House. She also discovered her own influences in Ed Sheeran, Adele and Amy Winehouse.

In 2019, she was a featured performer at Ipswich Unearthed at Studio 188, performed live on ABC Radio Queensland and Phoenix Radio, Ipswich, and she was a recipient of the 2019 Ipswich City Council’s Protege Masterclass Songwriting Development Program with I Heart Songwriting Club. 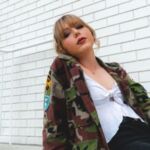 German born, 16 year old Paulina Schuemann, moved to Ipswich at the age of two, and considers herself more Australian than German. She stunned her parents and friends by imitating...

The Nucleus our brand new licensed bar will be open late afternoon and into the night.

Arrive early as there is limited capacity and we don’t want you to be disappointed.

All events at The Nucleus are general admission and as such seats cannot be reserved.

Where is The Nucleus?
The Nucleus, River Plaza, Queensland Cultural Centre is located near the entrance to the Queensland Art Gallery, Level 2, Corner of Grey and Melbourne Street, South Brisbane (on the grass next to the river).

Are you old enough?
This is a licensed venue so bring along your ID to show at the entry and at the bar. Minors must be accompanied by a responsible adult.

Can I buy food?
Yes! The Nucleus will be offering light food options.

What if it’s raining?
The Nucleus is undercover but if in doubt check our website for any last minute changes.

Accessibility
This is an outdoor event and the World Science Festival Brisbane ensures that its venues are as physically accessible as possible. The precinct is relatively flat with a mix of grass and paved surfaces. To discuss your individual needs and to book any access services, please call contact us.

Want to plan your visit to The Nucleus? Learn More