MOES has since been touring Australia as front man of Soul/Ska collective Fat Picnic, frequenting festivals such as Splendour in the Grass, Woodford Folk Festival, Island Vibe Festival and Caloundra Music Festival. As a guitarist MOES takes after the playing styles of Jimi Hendrix, John Frusciante and John Mayer. 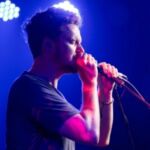 The Nucleus our brand new licensed bar will be open late afternoon and into the night.

Arrive early as there is limited capacity and we don’t want you to be disappointed.

All events at The Nucleus are general admission and as such seats cannot be reserved.

Where is The Nucleus?
The Nucleus, River Plaza, Queensland Cultural Centre is located near the entrance to the Queensland Art Gallery, Level 2, Corner of Grey and Melbourne Street, South Brisbane (on the grass next to the river).

Are you old enough?
This is a licensed venue so bring along your ID to show at the entry and at the bar. Minors must be accompanied by a responsible adult.

Can I buy food?
Yes! The Nucleus will be offering light food options.

What if it’s raining?
The Nucleus is undercover but if in doubt check our website for any last minute changes.

Accessibility
This is an outdoor event and the World Science Festival Brisbane ensures that its venues are as physically accessible as possible. The precinct is relatively flat with a mix of grass and paved surfaces. To discuss your individual needs and to book any access services, please contact us.

Want to plan your visit to The Nucleus? Learn More